One of the central questions in the history of modern Turkey continues be the late-Ottoman legacy and in particular, the experience of World War I and the War of Independence (1914-1923). While some authors choose this period as a start or end point for their historical studies, others seek to identify continuities across Ottoman and republican temporal space. In this episode, Nick Danforth describes different approaches to the periodization of modern Turkish history and explains the political and cultural views and sensibilities that lie behind some of these frameworks. 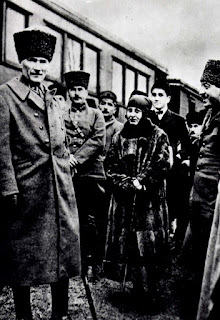 Göçek, Fatma Müge. The Transformation of Turkey Redefining State and Society from the Ottoman Empire to the Modern Era. London: I.B. Tauris, 2011.

Zürcher, Erik Jan. The Unionist Factor: The Rôle of the Committee of Union and Progress in the Turkish National Movement, 1905-1926. Leiden: Brill, 1984.

Eric said…
Quick comment: would you please post the credits for the intro and outro music clips for the podcasts? I'm particularly interested in the outro to this one.

This soundcloud link seems to be missing
I've looked but can't find an alternative...
Is there another option?