Islamic Law and Commerce in the Indian Ocean


The history of capitalism and the world economy, while increasingly global in its perspectives, remains a Eurocentric story, and one struggles to find the place of non-European modes of exchange and legal frameworks such as Islamic law within the big picture. In this episode, we talk to Fahad Ahmad Bishara about his book A Sea of Debt: Law and Economic Life in the Western Indian Ocean, 1780-1950 (Cambridge University Press), which argues that concepts and legal frameworks arising from Islamic societies deserve an important place in this narrative. As we discuss, merchants, cultivators, and financiers in the Indian Ocean world were linked in a shared understanding of commerce that employed Islamic legal frameworks. Throughout our conversation, we seek to understand what a picture of the emergence of capitalism in the Western Indian Ocean looks like when local actors are placed at its center.

Listen to this bonus conversation with Fahad Bishara to learn about the Sultanate of Oman and its centrality in the history of the Western Indian Ocean.

Episode No. 383
Release Date: 5 October 2018
Recording Location: Charlottesville, VA
Audio editing by Chris Gratien
Music: Bandista - Gavur İmam İsyanı; Lili Labassi - Mazal Haye Mazal; Istanbul'dan Ayva Gelir Nar Gelir - Azize Tozem and Sari Recep
Special thanks to karagüneş for permission to use the composition "Istanbul"
Thanks to our all our patrons on Patreon. Special shout out in this episode to Besiana Bella and Cemil Aydın for supporting our project. For more, visit patreon.com to learn about how you can support our independent and open access podcasts.
Bibliography and images courtesy of Fahad Bishara 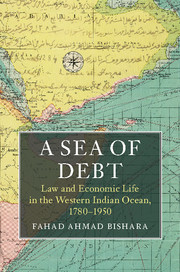 Aslanian, Sebouh. From the Indian Ocean to the Mediterranean: The Global Trade Networks of Armenian Merchants from New Julfa (University of California Press, 2011)

Mathew, Johan. Margins of the Market: Trafficking and Capitalism Across the Arabian Sea (University of California Press, 2016)