Holy War on Its Head: a French Call for Jihad 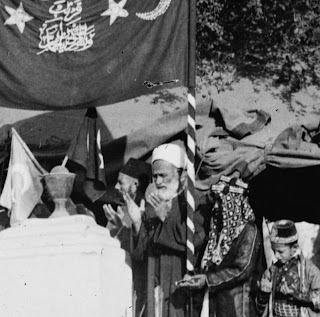 Holy War on Its Head

A French Call For Jihad

By the Fall of 1915, Ottoman society was in the throes of the most trying period of World War I. Famine and food shortages reached many parts of the empire. The deportations and massacres of Armenians that would come to be known as the Armenian Genocide were well underway. Gallipoli had become one of the bloodiest arenas of the war in the Ottoman realm during a summer offensive by the Allies in which both sides suffered heavily casualties under the added pressures of diseases such as malaria and dysentery.

The Ottomans' opponents (along with their allies) in the war had planned and speculated about the defeat and division of the Ottoman Empire from its beginning, and the liberating discourse of nationalism was increasingly seen as a potential rallying cry that would galvanize opposition among the various religious and ethnic minorities residing in Anatolia and Syria against the ruling CUP. It is within this context that this letter to the French Ministry of Foreign Affairs emerged offering a potential strategy that involved using the Ottomans' own words against them.

The news that the Ottoman Empire had declared World War I to be a "holy war," inviting the participation of all Muslim subjects regardless of ethnicity, was well-publicized in the West and decried as a self-serving Pan-Islamic discourse deployed by the Ottoman state. The author of this letter, Gustave Gauthier, a French officer with 18 years experience in the Ottoman and Arab realms, offered a way to turn this rhetoric against the empire by playing on nationalist sentiments, emphasizing the illegitimacy of a "Turkish" caliph and calling for a return of the Caliphate to its rightful place in the Arab world. Of course, he argues that all of this will be in French interest, helping to secure "our victory" against the Ottomans.

Thus, we find in this letter a French call to holy war against the Ottomans that invokes both the historical example of Selim I's conquest of Egypt in 1517 as well as evidence from the Quran and sayings of the Prophet emphasizing the centrality of Arabic language and Arabia within Islam in order to argue for the replacement of the Turkish caliphate with an Arab one. For those not fully convinced, he also offers an additional civilizational argument stressing the incompatibility of Turkish rule with progress. He concludes with a definitive statement about the true meaning of holy war in the World War I context that embraces warriors of all faiths: "Holy war is no longer a religious war that the masters or servants of Turkey can incite in order to defend their personal interests. In 1915, holy war has become for all religions the war of the allies, the war for civilization, the war against the Turks."