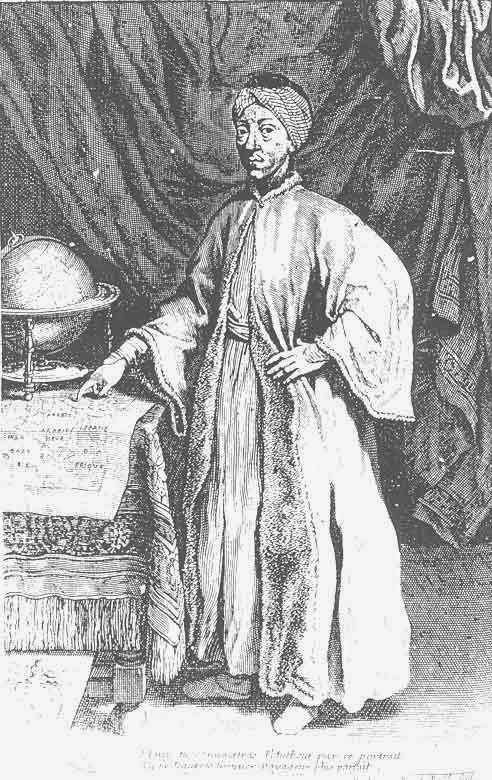 In 1665, the French linguist and botanist Jean de Thévenot published an account of his journey around the Ottoman Empire, which, as with most of those sorts of texts, examined Ottoman governance, religion, and dress as well. In its own right, his Relation d'un Voyage Fait au Levant (Relation of a Journey Made in the Levant) is an interesting source on a European's view of the Ottoman Empire in the seventeenth century, and was widely praised at the time.

Perhaps one of the most interesting parts of this book, at least from the perspective of an Ottomanist, is a short poem dedicated to Thévenot by one "La Croix Paitis", who is given the title 'Secretaire Interprete du Roy en Langue Turquesque' (interpreter to the king in the Turkish language). This poem is written in Ottoman Turkish, but in the Latin script, with a translation in French given underneath. For poetry buffs out there, it is written in hendecasyllabic verse (for the rest of us, each line has eleven syllables). Before I get into the details, here is the text with a modern transcription, followed by the French with a (very literal) English translation. 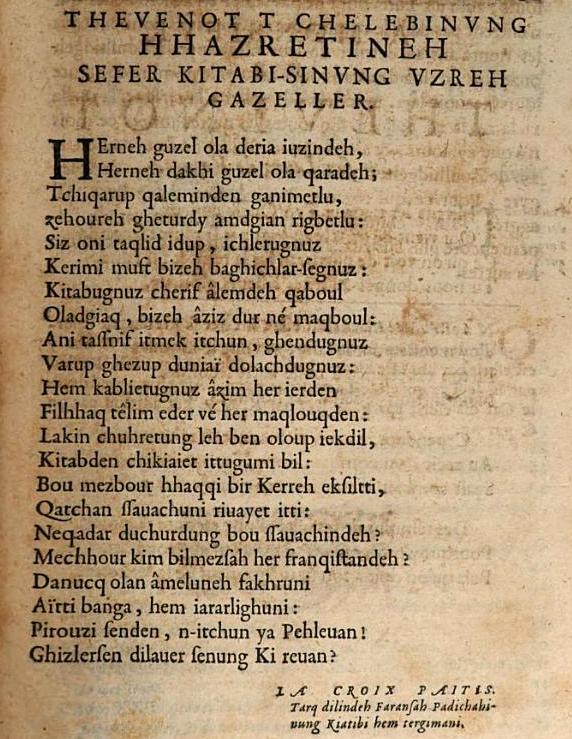 [Whatever is beautiful on the face of the ocean and whatever is beautiful on land comes abundantly from your pen like a curious uncle that you imitate in your work. Your generosity will pardon us. Your book will be accepted into the noble world; it is dear to us, how liked it is! In order to classify your remembrances, you yourself went and travelled around the world. It is your determined ability to teach truthfully about every place and every creature. But I plead with your fame, I complain to know from your book. The aforementioned truth is at once diminished as the fleeting war is narrated: how much did you lose in this war? That famous one that is known in all Europe? The deeds of your glory are hidden from me as well as your usefulness. Why, O Champion, do you deprive yourself of joy as you hide your bravery?] 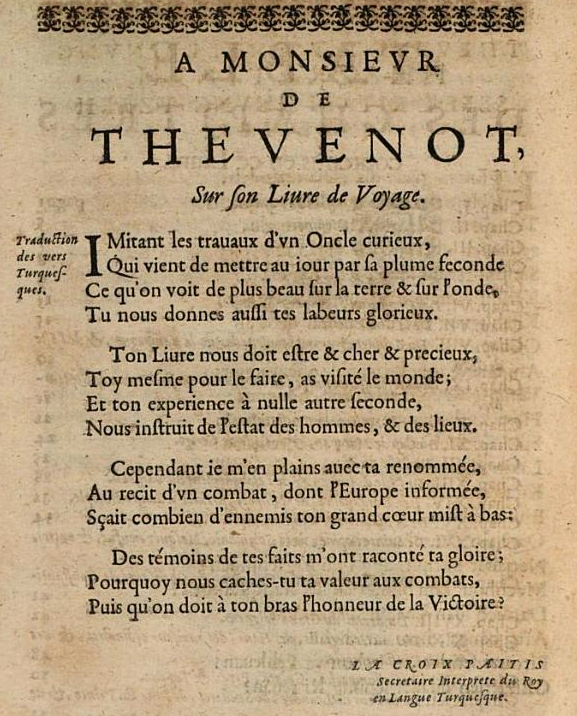 To Monsieur De Thevenot on his Travel Book

Imitating the works of a curious uncle,
Who came to bring to light by his second pen
That which seems most beautiful on land and sea,
You, too, give us your glorious labours.
Your book should be dear and precious to us,
You yourself have travelled the world to compile it;
And your experience, second-to-none,
Instructs us in the state of men and places.
Yet, I complain with your renown,
Of the narrative of a battle of which Europe is informed,
Knowing how many enemies your great heart placed below:
The witnesses of your deeds have told me of your glory;
Why do you hide from us your valour in combat,
Since we must honour the victory of your arm?

I'm not entirely sure which battle the poem might be referring to, although it could well be the Ottoman defeat to the Venetian navy in the Battle of the Dardanelles (1656). The poet's lament at the end could also refer to the fact that Thévenot did not publish his accounts of his first travels in Europe, because, according to the editor of the English translation, Archibald Lovell, he thought that the places he had travelled in (France, England, Italy) were already too well known. So, instead, he published his voyages around the Ottoman, Safavid, and Mughal Empires, and the accounts of his travels in Iran and India were published posthumously, as he died in Miyaneh near Tabriz in 1667. 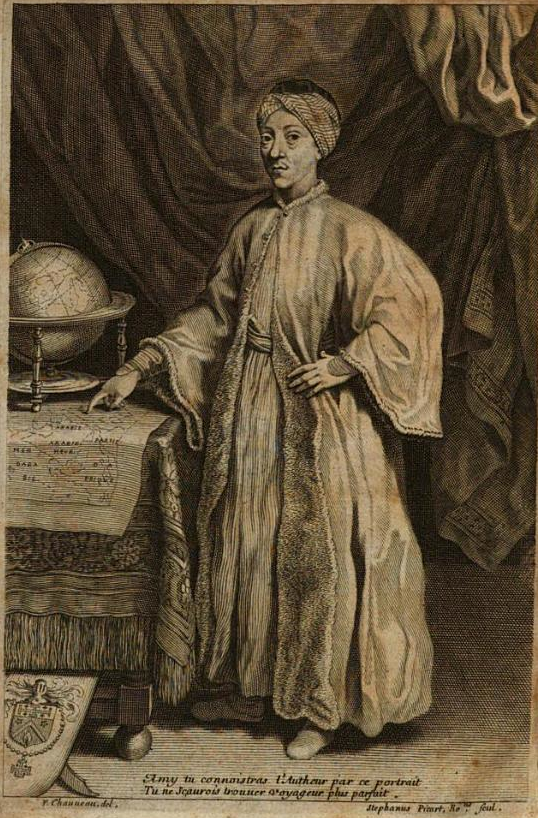 Jean de Thévenot from the 1665 edition. At the bottom, a verse reads: 'Friend, you will know the author by this portrait / You will not find a more perfect traveller.'

Now, I'm not exactly a literary critic of any kind, but it does not really seem to be the greatest poem ever written. However, although it is by no means perfect, the Ottoman Turkish is at least a valiant effort on behalf of this mysterious La Croix Paitis. This gentleman is almost certainly the father of François Pétis de la Croix, who was a noted French Orientalist who learned to read and write Arabic, Persian, Armenian, and Ottoman Turkish. He travelled extensively, to Syria, Isfahan, Morocco, and the North African Regencies. Among his scholarly output was a translation of the Thousand and One Nights. This poem, however, is the work of the father, the older François Pétit de la Croix, who served as the interpreter of Oriental languages until his death in 1695. He also seems to have been a translator for the French embassy in Istanbul, and wrote a number of largely unpublished manuscripts on his observations of Ottoman politics and culture, as well as travel literature on Istanbul, Jerusalem, and Ethiopia. He was able to read Arabic, Persian, and Ottoman Turkish at the very least.

There are numerous examples of attempts by European writers to transliterate Arabic, Persian or Turkish words in their travel accounts and treatises, but it is not common to get an extended piece of original writing as we have here. This gives us a good insight into de la Croix's abilities in Ottoman Turkish. His overriding concern seems to have been to make the poem rhyme in couplets, presumably attempting to imitate a Persianate style. However, what is more interesting to me is how de la Croix attempts to express the sounds of Ottoman Turkish. He does not simply transmit them into a standard sort of French orthography, but seems to have attempted to set his own alphabetic conventions. The transliteration system is fairly regular, so that a 'q' tends to represent a 'ق', 'gn' a 'ڭ' (therefore pronounced like the Spanish 'ñ'), and 'dg' a 'ج'. There are some interesting hints as to his understanding of pronunciation, such as on the following couplet:

It is your determined ability to teach [us] truthfully about every land and every creature.

'Ayins are irrelevant in the transliteration (as in 'azim or ta'lim), and the phrase 'filhak' is given as it is said, not written (i.e. fi al-haq) which shows that he knew about elision in pronunciation. The same can be said for his use of 'n-itchun' (niçin / نيجون) rather than 'ne için'. There seems to be some variation in how de la Croix presents certain letters, such as the 'خ'. He transliterates 'مخلوق' as 'maqlouq', suggested that it takes on a 'k' sound, whereas elsewhere it is given as 'kh' as in 'dakhi' (dahi / دخى), suggesting a more guttural sound. Similarly, sometimes he transliterates 'ح' as 'hh' as in 'hhazret' (hazret / حضرت), sometimes not, and the letter 'ك' can be a 'gh' as in 'ghendugnuz' (kendiniz / كنديكز) or a 'k' as in 'kitabugnuz' (kitabınız / كتابكز).

Such details of the transliteration may seem minor, but to a linguist such as de la Croix, thinking about the mechanics of his languages was an incredibly important part of what he did. These differences in transliteration, therefore, are likely to reflect differences in pronunciation as de la Croix understood them. This effort on his part would not have been taken lightly, as Orientalist scholars in the seventeenth century were always ready to criticise each other on the most minor of philological points. For instance, laudatory as de la Croix was in his poem prefacing the first part of Thévenot's book in 1665, he was not so kind in a six-page letter inserted in the second part published in 1674. In that letter, he sought to correct some of Thévenot's claims about the meanings and derivations of certain words. To give one example, de la Croix criticised Thévenot for giving the word for 'astrologer' (müneccim / منجم) as 'munehiziim', when de la Croix said it should be given more accurately as 'munedgim'. Such things were incredibly important to Orientalists such as de la Croix, and it seems clear to me that he was more comfortable arguing points of philology and linguistics than composing odes to travel writers. Nonetheless, his poem celebrating Thévenot's work is an important example of the fruits of Orientalist scholarship, and a fascinating insight into how Ottoman Turkish was perceived by a seventeenth-century Frenchman.