Produced and Narrated by Chris Gratien


In the years after the world war that ravaged the Ottoman Empire, Hassan left his native village in modern-day Lebanon to join his parents and siblings in the growing Midwest town of Sioux Falls, South Dakota. To do so, he had to sidestep the stringent immigration quotas newly implemented by the US. But years later, when the authorities learned that he entered and was living in the US illegally, he was threatened with deportation. Through Hassan's story, we'll learn about the experience of Arab migration to the United States and get to know the Syrian-American community that despite numbering in the hundreds of thousands by the 1920s, found itself repeatedly compelled to prove its worthiness to be included in a society where nativism was on the rise and being entitled to full citizenship often meant being considered white.

This episode is part of our investigative series Deporting Ottoman Americans.


The United States was one of the major destinations for Arabic-speaking migrants from the Ottoman Empire beginning in the late 19th century. Most of these people came from modern-day Lebanon, but these Arabic-speaking migrants were generally referred to collectively as Syrians. Major centers of settlement were around New York City, Boston, and Detroit, but by the 1920s, Syrians could be found all over the country. Many worked as peddlers, a profession that took them to small towns in rural areas of the Midwest, where they established small communities bolstered by chain migration.


As Reem Bailony explains in the above interview, most Syrians in the US were Christian, but Muslims from all the communities of Greater Syria came as well. There were mosques founded in cities of the Midwest as early as the 1920s. The oldest standing purpose-built mosque in the United States is in Cedar Rapids, Iowa.

Alixa Naff (1919-2013) was a pioneer in the study of the Arab-American experience. Recordings and transcripts of her oral history interviews conducted in the Arab-American community over the decades, as well as many other resources pertaining to the history of Arabs in America, are open to researchers at the Smithsonian Institution in Washington, DC. They have been vital to understanding of the process by which Arabic-speaking migrants established new roots in the United States. In the clip below, Grant Farr talks to prominent Arab-American activist Aliya Hassan about the rise of the Highland Park and Dearborn communities during the 1920s.

The US was not the only destination for Syrian migrants. Over 500,000 Arabic-speaking migrants and their descendants lived in the Americas. Listen to our interview with Lily Pearl Balloffet to learn about one of largest Syrian diaspora communities located in Argentina. Or try our interview with Andrew Arsan, author of a history of the Lebanese diaspora in the French colonial empire in West Africa.

Modern-day Lebanon was a large migrant sending region primarily due to its highly commercialized economy and connection to global markets and migration routes. During the 19th century, the inhabitants of Mount Lebanon began to devote much of their land to the cultivation of mulberry trees to feed silk worms (see image below). Their silk was exported via Beirut to markets in France and elsewhere. But when demand for silk began to dry up, the people of Mount Lebanon and Beirut began to move abroad in search of new economic opportunities.

Just as Syrian migrants transformed the places where they settled, return migrants brought new ideas and cultural practices back with them to the home country. In the lecture below, Akram Khater reflects on this process, which he studied in the book Inventing Home.

The diaspora played an important role in the lives of people from Lebanon and Syria particular throughout the First World War and its aftermath. As historian Stacy Fahrenthold argues in her forthcoming book, the diaspora was central to political debates about the future of the post-Ottoman Middle East. But people in Syria and Lebanon had also come to rely on the diaspora as a source of income. This was one reason why Lebanon in particular suffered such high mortality from famine during the First World War, when starvation as severe as the Great Famine of Ireland in percentage terms unfolded in 1915. As Graham Pitts has recently shown in a new GIS-mapping project, the US consulate in Beirut did continue to try to process transfers that were blocked as wartime hostilities and a British and French blockade severed Lebanon's ties to the outside world. The map below shows the uneven distribution in the destinations of remittances processed by the American Consulate in Beirut during the war.

It is often forgotten that the Middle East and Lebanon in particular have been shaped by constant waves of migration that occurred under Ottoman rule and have continued up until the present. As Nadim Shehadi noted in our interview, the story of the Lebanese diaspora has often overshadowed the long history of migration into Lebanon. And as Sumayya Kassamali explains in another interview on our website, the treatment of migrants remains a heated political issue in Lebanon today.

Syrians and Race in the United States


During the 1920s, a rising tide of nativism in the United States began to manifest as law and state policy. In 1924, the Johnson-Reed Act created a new system of immigration quotas aimed at stemming the influx of non-white or "less-white" immigrants from Southern Europe, Eastern Europe, the Middle East, and Asia. As Linda Gordon explains in the interview below, Albert Johnson, one of the authors of that act, was a member of the Ku Klux Klan, which was reborn as a mass political movement during the 1920s and claimed millions of members at the time.


Syrians had already been migrating and naturalizing in the US for decades, and they had fought court cases to certify their status as "white" under the law. But during the 1920s, anti-Syrian sentiment accompanied the nativist backlash that continued into the Great Depression. As Sarah Gualtieri explains in the book Between Arab and White, a Syrian grocer in Florida was the victim of a lynching that rocked the entire Syrian-American community.

At the end of the 1930s, the Democratic administration of Franklin Delano Roosevelt began reintroducing the idea of America as a nation of immigrants into official rhetoric as part of efforts to combat the increasingly illiberal aspects of far-right politics and the rise of fascism. The radio series called Americans All, Immigrants All featured episodes on the history of immigrant communities in the US that demonstrated their contribution to the nation and commitment to American values. Episode 18 dealing with "Near Eastern Peoples" is available through the WNYC archives. In the NPR interview below, historian Jill Lepore talks about this program and radio in combating an "attack on democracy" during the 1930s.


Even though programs like Americans All, Immigrants All valorized stigmatized migrant communities like Syrians, in doing so, they reified assimilationist discourses that placed pressure on immigrants to adopt American customs and to perform their Americanness in various ways. This "respectability" discourse was the flip-side of a similar discourse that villified immigrants and presented them as corrupting influence; both were consistent with eugenicist logics of the time in different ways. As a result, from the rise of the Syrian diaspora during the late 19th century to the Arab-American community of post 9/11 America today, identity has been the subject debate, controversy, and transformation for successive waves of Arabic-speaking migrants.

Hassan's deportation case file was contained within the records of the American Consulate in Beirut for the year 1934 at the US National Archives and Records Administration in College Park, MD. Not every deportation the US carried out can be studied through the embassy and consular files in the archives; only those that involved diplomatic questions. In this case, the US had to correspond with the French Mandate government in Lebanon in order to ascertain Hassan's identity and obtain a travel document so that he could be deported. Hassan had reportedly lost his passport.

Deportation case files contain a wealth of autobiographical information about a migrant due to the sometimes very long interrogation records about their life history and familial relationships. Hassan's deportation file was especially rich because his lawyer brought character witnesses and submitted letters testifying to the law-abiding and upstanding nature of Hassan, his family, and the Syrians of Sioux Falls. In the letter below, a salesman who knew Hassan from the period during which he helped run his father's store in Sioux Falls vouched for Hassan and his family as good citizens of the small South Dakota town. 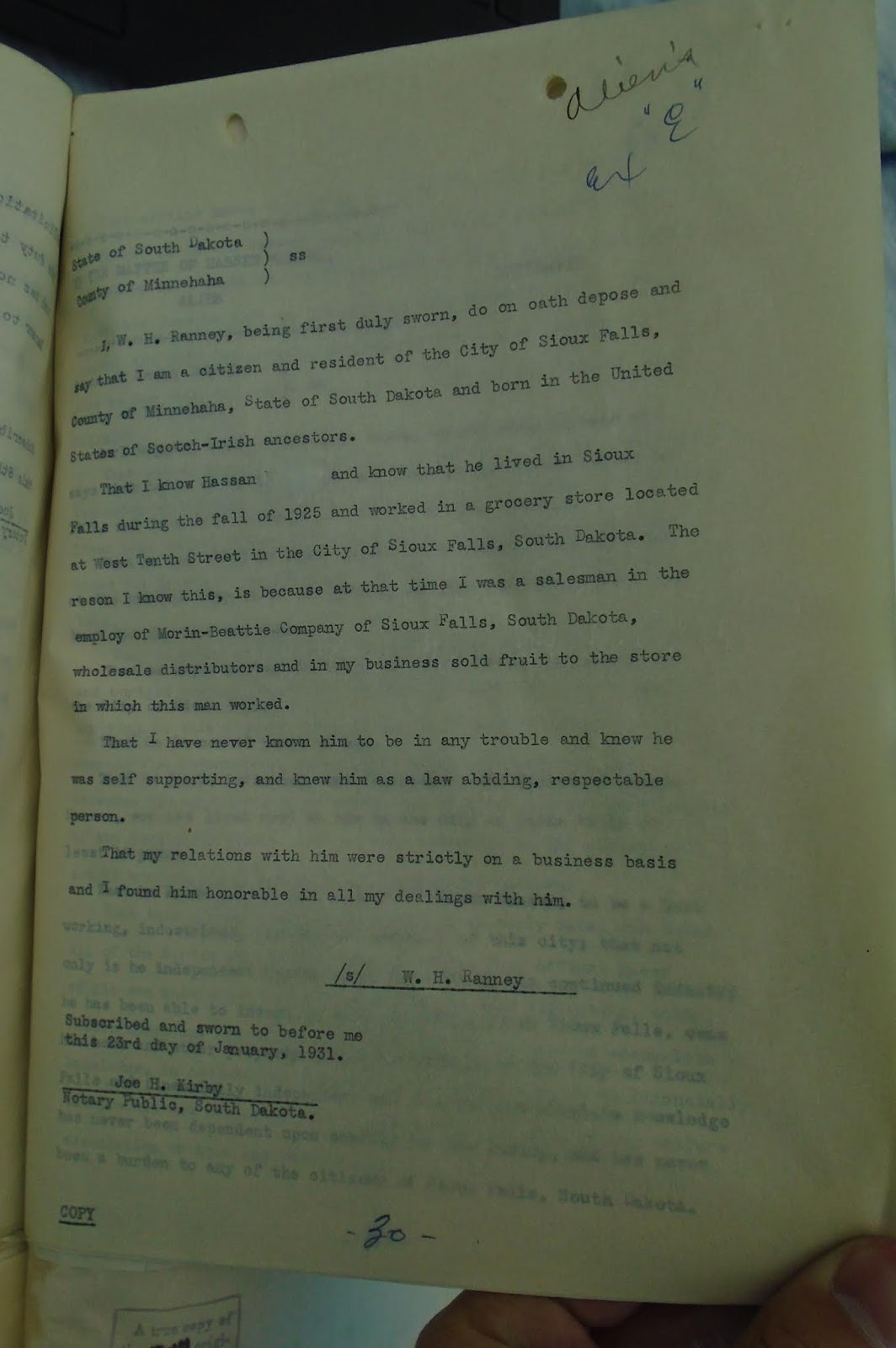 Gordon, Linda. Second Coming of the KKK: The Ku Klux Klan of the 1920s and the American Political Tradition. Liveright Publishing, 2018.

Gualtieri, Sarah M. A. Between Arab and White Race and Ethnicity in the Early Syrian American Diaspora. Berkeley: University of California Press, 2009.

Hourani, Albert and Nadim Shehadi. The Lebanese in the World: A Century of Emigration. London: IB Tauris, 1992.

Nail, Thomas. The Figure of the Migrant. Stanford University Press, 2015.

Pope-Obeda, Emily. "When in Doubt, Deport!": U.S. Deportation and the Local Policing of Global Migration During the 1920s (Ph.D. Thesis). University of Illinois, Urbana-Champaign, 2016.

Zolberg, Aristide R. A Nation by Design: Immigration Policy in the Fashioning of America. 2008.