Those of us who have an interest in the Middle East often find ourselves squirming in our seats or choking on our popcorn at the depiction of the region and its people in film productions. Sut Jhaly's 2006 documentary, Reel Bad Arabs: How Hollywood Vilifies a People, painted a vivid and disturbing picture of the overwhelmingly negative portrayal of Middle Easterners in American cinema. Stereotyping of 'Arabs' - there being no distinction between the various ethnic, linguistic and confessional communities of the region - goes way back to the earliest feature productions, notably anything starring Rudolph Valentino.

But before the feature film really took hold (i.e. before about 1910), the majority of films were shorts, typically less than five minutes. Very often these were exhibited as entertaining interludes on the bill of a music hall/vaudeville show. They might be slapstick comedies, a dramatic episode in a play, or pictures from a newsworthy event. In some cases these shorts were simply filmed versions of the sort of entertainment one might expect to see on stage, such as jugglers or dancers.

Some of these early short films are interesting in that they show just how early the stereotyping of Middle Easterners began. I've done some hunting to find a few films that reference 'Turks' specifically, but very often there was little difference in how 'Turks' or Arabs' were portrayed. The three short films I've chosen below give a nice little indication of some of the images of Ottomans shown to Western cinema-goers before 1905.

By far the most typical character in these early shorts is that of the dancing girl, specifically, the 'belly dancer'. At the 1893 Chicago World's Fair, an Egyptian dancer, whose name has been recorded as Fatima Djemille (i.e. beautiful Fatima), performed a dance that was to spark a performative and cinematic craze. The Edison film studios first recorded a tribute to Fatima's shakes in Fatima's Coochee-Coochee Dance (1896). This sort of film was then replicated a huge number of times, more than we can probably imagine due to the accidence of survival of early film reels.


One imitation that has survived is Turkish Dance (1898), which you can watch above. This is another Edison film, performed by Ella Lola, a professional dancer from Boston. Not all of these early films were so sexualised; some, such as Edison's Arabian Gun-Twirler (1899), showed more martial talents, but these were rare. Films featuring belly-dancers were by far the most common, and give us a good idea of the taste for Oriental sexuality among cinema-goers. 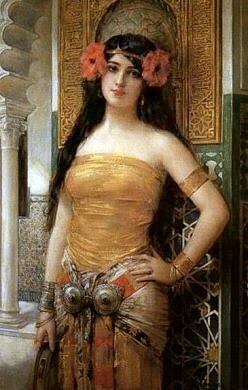 
At the same time that these sort of simple vaudeville productions were being made in one set of studios, a cinematic revolution was occurring in another. One of the most prolific and creative film-makers of the 1890s and early 1900 (and owner of fantastic facial hair) was the Frenchman Georges Méliès. From his groundbreaking studio in Montreuil, a suburb of Paris, he experimented with a variety of camera tricks, special effects, and colour films (using an army of women to hand-paint individual film cells), producing some of the first horror films such as Le Manoir du Diable (The Devil's Castle, 1896) and sci-fi classics such as Voyage dans la Lune (A Trip to the Moon, 1902).

Among the hundreds of short films created by Méliès, two may be of interest to Tozsuz Evrak readers in their very different depictions of the Ottoman Empire, one focussing more on an image of timeless barbarity, and another on a progressive and successful modern state.

In an Istanbul marketplace, after an entrance by some obligatory belly-dancer-type ladies, four turbaned and bearded men stand in their place of execution. The cruel and alcoholic executioner gets up from his meal and drink, and staggers over to them with a giant scimitar. After taunting the condemned, he lops off their heads in one mighty stroke, and plonks their heads in a barrel. This, of course should be the end.

But - and in a Méliès film there is almost always a 'but' - somehow, by magic, the heads have survived and bounce up and down in the barrel to have a look around. As the executioner is distracted by his food and booze, one of the heads leaps out and reattaches itself to its body. The re-embodied man rushes up, and re-capitates the heads of his fellows. After a brief discussion, they grab the executioner, take him over to the execution spot, and shear the wicked man in half with his own sword. For a short while, the executioner's legs scoot around, quite literally like a headless chicken, until he too manages to reunite the separated parts of his body. Realising that the condemned men have by now ran away, the executioner summons the guard, and some soldiers and belly-dancers chase after the four fugitives. 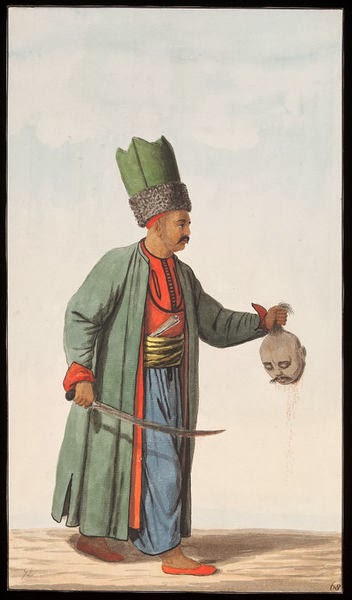 A tale worthy of the Arabian nights, and a typical combination of violence, corruption, and sex that one might expect in an Orientalist imagining of the Ottoman Empire (as well as being pretty advanced in terms of cinematic technique and special effects). Yet perhaps this film is equally a reflection of a more recent understanding of Ottoman violence, being made less than a decade after the massacres of Ottoman Armenians in 1894-6 that provoked outrage in France.

In complete contrast to the first and second films, the third film presents a more modern and heroic image of the Ottoman Empire. Shot a few years earlier and in a completely different sort of style, La Prise de Tournavos (The Capture of Tournavos, 1897), is a reconstruction of the Ottoman victory at the Siege of Tyrnavos in the Ottoman-Greek War of 1897.

In this imagining of the action, the Greek defenders shoot at the advancing Ottoman troops over the ramparts, but faced with a full assault retreat back into a fortified building and slam the door shut. The Ottoman soldiers (wearing fezzes and all) attempt to break the door down with their rifles, but an officer pushes them back as a charge is laid. They all take cover, the charge sets off, and the door shatters. The brave Ottoman officer directs his men forward to clear the building, but - I told you, there's always a 'but' - is cruelly shot down at the moment of victory. In this portrayal of the Ottomans, their troops are brave, intelligent, and disciplined - in other words, perfectly modern Europeans. The audience are even encouraged to have sympathy for them, with the unexpected and tragic death of their commander right at the end of the film. 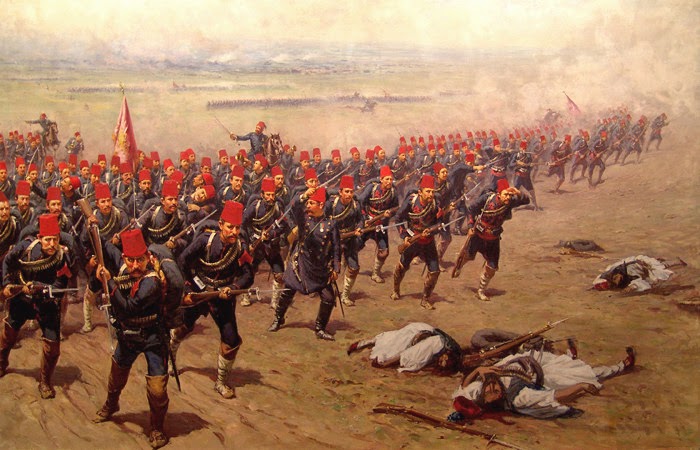 Hücum (The Attack) by Fausto Zonaro (1897), from Wikimedia Commons

Undoubtedly, the story and vision of The Capture of Tournavos would have sat far better with real-life Ottomans than the fantasy of The Turkish Executioner. But, of course, it is equally doubtless that cinema-goers in the music halls of Paris, London, and New York, as with audiences today, would much have preferred some belly-dancers and head-chopping to images of an Ottoman victory. Indeed, as this film of British Pathé from the First Balkan War shows, in the years that followed there would be more than enough images of real soldiers and combat from the East projected in cinemas.